Part One: Getting Started

The Octopus story began in January 2017 with a Facebook announcement on Eric’s Facebook page. Within 30 minutes, we had sold our first hammocks and were officially in business. At the time, we had only two products- creatively named “The Blue One” and “The Green One”. You can probably guess why we chose those names. For the next few months, Eric sold hammocks out of his dorm room, keeping several hundred hammocks under his mattress. Once, he narrowly avoided being kicked out of the apartment for violating a university rule about operating a business in the dorms. Sales were slow but steady and we continued to grow. The first Octopus hammock ever - hanging in Eric's basement.

As summer grew closer, we sold out of our first round of hammocks and ordered some more. At the beginning of the summer, Heidi joined the Octopus team as our marketing manager. We were excited for the summer because it’s generally the most popular time for people to buy hammocks. We didn’t know that we were about to learn a difficult lesson about sourcing products overseas: the waiting game.  We waited for week after week for our supplier to ship the order, but nothing arrived. Finally, toward the end of June, we received our hammocks, but by then the hammock season was coming to an end. Missing out on this season taught us a lot about working with our suppliers in the future. In the early days, we couldn't afford models so Eric sat in for all our product photography. These days, we pay our models (aka friends) with snow cones.

Going into the fall, Eric had an idea for a new kind of hammock: the Type 7. The problem was, we couldn’t afford our supplier’s minimum order requirements. To raise money, we launched a Kickstarter campaign in November 2017. With the help of friends, family, and strangers we raised 125% of our goal! One of Eric’s professors even offered extra credit to anyone who supported our campaign which helped us raise 20% of our goal on the first day. With the money, we launched the new Type 7 hammock on our site and sent out dozens of hammocks to our backers. 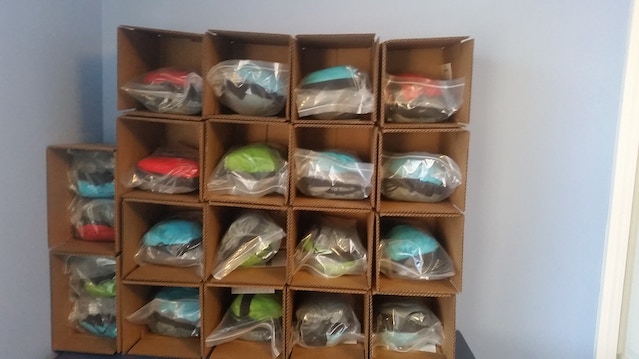 Some of the hammocks from the Kickstarter campaign. We can't say thank you enough to everyone who supported us!

In October 2017, Jesse joined the Octopus team as our head of operations. Jesse and Eric developed the company’s goals and direction over the coming months and brainstormed dozens of ideas for Octopus. This time was exciting and challenging as we learned to work and grow together. Throughout the fall and winter, Octopus grew from a side project to a real company. We landed our first retail partner around this time and started sponsoring Baylor’s Outdoor Adventure program too. Things were starting to get going! This garage was our warehouse and office for fall 2017 and spring 2018. On hot days, it was more like an oven than an office, but we made it work!

After weeks of planning and brainstorming, Eric and Jesse finalized some key improvements to the new Type 7 Hammock. This was a big deal because it was the first product that Jesse had launched, and just in time for summer. Jesse, Eric, and Heidi went home for the summer vacation and got ready for an exciting season filled with adventure. Hammocking in the Type 7 with our friends - never pass up an opportunity to take a good photo.

We don’t know what the future holds for us or Octopus, but we’re still very excited! If we’ve learned anything in our first year of business, it’s that anything can happen. It’s been a truly wild ride, and we are constantly blessed by the support of our customers and friends. We can’t wait to see what comes next for Octopus, and we ‘re looking forward to bringing you along with us.